Ayurvedic medicine uses herbs, special diets, and other natural practices as treatment for a variety of conditions.

In Ayurvedic medicine, ashwagandha is considered a Rasayana.

That means it’s a herb that helps maintain youth, both mentally and physically.
The Immune system, Nervous system
Vitamins B3, B5, B6, B12 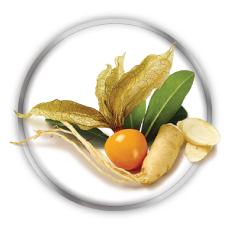 Ashwagandha Plus Botanicals works best when combined with adequate rest and sound nutrition, and offers support for those who wish to put their body back in balance, boost immunity and reinvigorate their energy levels to better manage life's daily physical and mental stresses.

The adrenal glands produce hormones that underpin the body’s mechanisms for coping with physical and mental stress. Overtraining in athletes, chronic anxiety, worry, nervous tension and other factors associated with excessive cortisol release are linked to adrenal exhaustion and fatigue. Over-reliance on caffeine and other stimulants also taxes the adrenals.

This food supplement helps to regulate hormonal activity, allowing users to better manage their stress response on a day to day basis. This original formula helps the body to adapt to what it needs – backed by science.

It combines essential nutrients and nutraceuticals that support hormonal and adrenal health. Pantothenic acid, for example, is involved in the synthesis and release of adrenal hormones.

This Ashwagandha complex is most effective when combined with adequate rest and sound nutrition And provides support for those who wish to get their body back in balance, increase immunity and reinvigorate their energy levels to endure life’s daily physical and mental stresses better.

Vitamin B3 (niacin) contributes to healthy psychological function, normal energy-yielding metabolism, healthy functioning of the nervous system, the maintenance of normal mucous membranes, the maintenance of healthy skin and the reduction of tiredness and fatigue.

Vitamin B5 (pantothenic acid) contributes to normal energy-yielding metabolism, normal mental performance, healthy synthesis and metabolism of steroid hormones, vitamin D and some neurotransmitters, and the reduction of tiredness and fatigue.

Vitamin B6 (pyridoxine) contributes to the normal function of the immune system, the regulation of hormonal activity, healthy cysteine synthesis, normal energy-yielding metabolism, normal homocysteine metabolism, healthy protein and glycogen metabolism and the reduction of tiredness and fatigue.

Ashwagandha root: Belonging to the same family as the tomato, ashwagandha is a plump shrub with oval leaves and yellow flowers. It bears red fruit about the size of a raisin. The herb is native to the dry regions of India, northern Africa, and the Middle East, and today is also grown in more mild climates, including the United States.

Astragalus root: Astragalus propinquus, commonly known as Mongolian milkvetch in English and as huáng qí, běi qí or huáng huā huáng qí in Chinese, is a flowering plant in the family Fabaceae. It is one of the 50 fundamental herbs used in traditional Chinese medicine. Chemical constituents of the roots include polysaccharides and triterpenoids, as well as isoflavones and their glycosides and malonates.

Panax ginseng: Ginseng is any one of the 11 species of slow-growing perennial plants with fleshy roots, belonging to the genus Panax of the family Araliaceae. Panax ginseng is the botanical cousin of Siberian ginseng. The Panax ginseng used in this food supplement is of the Korean variety.

Maca root: The maca plant belongs to the brassica (mustard) family and, like broccoli and cauliflower, is a cruciferous vegetable. It grows in the mineral-rich mountains of the Andes at an elevation of about 12,000 to 14,000 feet. It is found in Peruvian provinces such as Junín and Pasco, where it thrives in extreme weather conditions that include powerful winds, bitter cold and harsh sunlight. Maca is a tuber, which means that under the ground, the plant stores its rich nutrients in a bulb shaped like a radish or turnip. It is rich in vitamins C and A, as well as B2, B6 and niacin. The hardy root is also packed with minerals, including iron, zinc, iodine, calcium, copper, magnesium and potassium. Maca is also rich in plant sterols, and contains fatty acids.

Liquorice root: Liquorice is the root of Glycyrrhiza glabra from which a sweet flavour can be extracted. The liquorice plant is a herbaceous perennial legume native to southern Europe and parts of Asia, such as India. A great flavouring agent in both Eastern and Western foods and confections.

Rhodiola rosea: Also known as golden root, rose root, or artic root, Rhodiola rosea is a perennial flowering plant from Siberia that does well in dry and cold arctic climates.

Reishi mushroom: The lingzhi mushroom is a polypore mushroom belonging to the genus Ganoderma. Its red-varnished, kidney-shaped cap gives it a distinct appearance. When fresh, the lingzhi is soft, cork-like and flat. It lacks gills on its underside, and instead releases its spores via fine pores. Depending on the age of the mushroom, the pores on its underside may be white or brown. It grows at the base and stumps of deciduous trees, especially that of the maple. Only two or three out of 10,000 such aged trees will have lingzhi growth, and therefore its wild form is extremely rare. Today, lingzhi is effectively cultivated on hardwood logs or sawdust/woodchips.

Vitamin B5 (pantothenic acid): Vitamin B5 contributes to normal energy-yielding metabolism, normal mental performance, normal synthesis and metabolism of steroid hormones, vitamin D and some neurotransmitters, and the reduction of tiredness and fatigue. Click here and here for EFSA scientific opinions.

Black pepper: Black pepper (Piper nigrum) is a flowering vine in the family Piperaceae, cultivated for its fruit, which is usually dried and used as a spice and seasoning. When dried, the fruit is known as a peppercorn. When fresh and fully mature, it is approximately 5 millimetres (0.20 in) in diameter, dark red, and, like all drupes, contains a single seed. Peppercorns, and the ground pepper derived from them, may be described simply as pepper, or more precisely as black pepper (cooked and dried unripe fruit), green pepper (dried unripe fruit) and white pepper (ripe fruit seeds). Piperine is the alkaloid responsible for the pungency of black pepper.

Gotu kola: Centella asiatica, commonly known as centella, Asiatic pennywort or Gotu kola, is a herbaceous, frost-tender perennial plant in the flowering plant family Apiaceae. It is native to the wetlands in Asia and used as both a culinary vegetable and as a herb in supplements. The stems are slender, creeping stolons, green to reddish-green in colour, connecting plants to each other. It has long-stalked, green, rounded apices which have a smooth texture with palmately netted veins. The rootstock consists of rhizomes, growing vertically down. They are creamish in colour and covered with root hairs. The flowers are white or pinkish to red in colour, born in small, rounded bunches near the surface of the soil.

Turmeric: Turmeric is a rhizomatous herbaceous perennial plant (Curcuma longa) of the ginger family, Zingiberaceae. It is native to southern Asia. When not used fresh, the rhizomes (roots) are boiled for 30 - 45 minutes and then dried in hot ovens, after which they are ground into a deep orange/yellow powder that is commonly used as a natural colouring and delicious spice in Bangladeshi, Indian, Iranian and Pakistani cuisine, as well as for dyeing. Turmeric root powder has been long used by Ayurvedic practitioners, largely due to its main constituent, curcumin. More recently, it has become increasingly popular in the Western world for use in both food and food supplements, after much TV, magazine and radio coverage.