Montmorency cherries are rich in antioxidants and contain potent, naturally-occurring phytonutrients, including anthocyanins and melatonin,

which have been linked to a variety of health beneﬁts.

Montmorency cherries are one of the few known food sources of melatonin.

A natural compound produced in the brain’s pineal gland that controls the body’s natural sleep cycles and circadian rhythms.

Montmorency cherries are one of the few known food sources of melatonin.
Energy & Immunity
Support 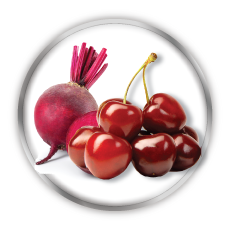 These two primary ingredients are then complimented by the addition of three nutritive allies in the same formula - vitamin B6, black pepper powder and turmeric extract (95% curcumin) - to provide additional support for the reduction of tiredness and fatigue, energy-yielding metabolism, immunity, red blood cell formation, the nervous system, hormonal activity, protein and glycogen metabolism and more.

These potent ingredients have been formulated with the addition of three nutritive allies in the same formula – vitamin B6, black pepper powder and turmeric extract (95% curcumin).

Particularly popular with athletes, this combination food supplement offers those who place high demands on their body a winning combination for support of energy levels (the reduction of tiredness and fatigue), energy-yielding metabolism, immunity, red blood cell formation, the nervous system, hormonal activity, protein and glycogen metabolism and more.

1 capsule to be taken 1 - 3 times per day (preferably with food), or as advised by a health practitioner.

Beetroot is the taproot portion of the beet plant. It is one of several of the cultivated varieties of Beta vulgaris grown for their edible taproots and their leaves (called beet greens). The deep red colour of beetroot results from the presence of a type of betalain pigment (betacyanins). Beetroot also contains betaine and inorganic nitrates.

The deep red colour of beetroot results from the presence of betalain pigments. There are two categories of betalains, one of which is responsible for these reddish to violet colours - betacyanins. Betanin is an example of betacyanins present in red beetroot.

Betaine is a naturally-occurring substance and amino acid, found in plants and particularly in beetroot. Betaine is created by choline, in combination with the amino acid glycine.

Nitrate is an inorganic compound composed of nitrogen and oxygen and found naturally in soil and water. The nitrate in our diet comes from both food and drinking water, but the highest levels of dietary nitrate are found in vegetables.

Montmorency cherries are a type of red, sour cherry - Prunus cerasus. They are grown in Canada, France and the United States and are part of the lighter red Amarelle cultivar of sour cherries, rather than the darker-red Morello cultivar.

Vitamin B6 contributes to the normal function of the immune system, the regulation of hormonal activity, normal cysteine synthesis, normal energy-yielding metabolism, normal homocysteine metabolism, normal protein and glycogen metabolism and the reduction of tiredness and fatigue. Click here and here for EFSA scientific opinions.

Turmeric is a rhizomatous herbaceous perennial plant (Curcuma longa) of the ginger family, Zingiberaceae. It is native to southern Asia.

When not used fresh, the rhizomes (roots) are boiled for 30 - 45 minutes and then dried in hot ovens, after which they are ground into a deep orange/yellow powder that is commonly used as a natural colouring and delicious spice in Bangladeshi, Indian, Iranian and Pakistani cuisine, as well as for dyeing.

Turmeric root powder has been long used by Ayurvedic practitioners, largely due to its main constituent, curcumin. More recently, it has become increasingly popular in the Western world for use in both food and food supplements, after much TV, magazine and radio coverage.

Black pepper (Piper nigrum) is a flowering vine in the family Piperaceae, cultivated for its fruit, which is usually dried and used as a spice and seasoning. When dried, the fruit is known as a peppercorn. When fresh and fully mature, it is approximately 5 millimetres (0.20 in) in diameter, dark red, and, like all drupes, contains a single seed.