If you’re Vegan, Vegetarian or allergic to seafood, getting all your Omega fatty acids can be a challenge. Hemp Protein Plus changes all that.

They also contain gamma-linolenic acid, which has been linked to many health benefits.
Hemp Pro-Plus
Contains 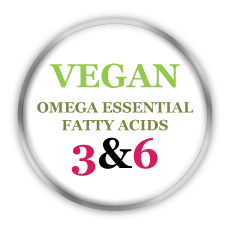 Hemp Pro-Plus protein powder provides complete, balanced and natural vegan protein from hemp seed (45.2g per 100g) with all of the essential amino acids, making it an excellent alternative to animal protein. It is also high in fibre (16.2g per 100g) and low in saturated fat (1.0g per 100g).

This hemp vegan plant protein powder is also a source of phyto-nutrients from both the hemp and other foods and herbs included in the blend.

Unlike many other hemp protein powders on the market, Hemp Pro-Plus contains No hexane or other toxic chemicals, which are often used during the hemp protein extraction process. Our hemp protein is extracted using only water, pressure and then flocculation.

Plant protein from hemp seed (13.6g per serving)
Complete amino acid profile With phyto-nutrients from other foods and herbs

Hemp Pro-Plus Protein powder provides complete, balanced and natural protein from hemp (46.4g per 100g) with all of the essential amino acids. It is also high in fibre (16.3g per 100g) and low in saturated fat (1.1g per 100g)

It beats single-ingredient protein powders hands-down! It is easily digestible and does not cause bloating or flatulence, which many people experience with dairy-based protein powders - an ideal alternative to whey and soya.

Be adventurous! Blend with fruit and berries for that extra nutritional boost and natural sweetness. Enjoy at breakfast, lunch or any other time of day.

Hemp Pro - Plus  (Original Flavour) can be used as part of a high protein Vegan diet.

More about the ingredients...

The main ingredient in this high quality formula is hemp seed protein powder - a complete, natural and balanced source of protein. Hemp contains essential fatty acids (such as Omega 3 and Omega 6 oils), all of the essential amino acids and other nutrients. There aren't many other single plant sources that provide complete protein nutrition in such an easily digestible form. As a plant-based source of protein, it is lean, low in saturated fat and suitable for vegetarians and vegans. It is also naturally dairy-free and gluten-free.

Alfalfa is a source of chlorophyll, vitamins (such as pro-vitamin A (B-carotene, vitamins B6, C, D, E, K and P), minerals (such as calcium, magnesium, potassium, iron and zinc), dietary fibre and other nutrients (such as isoflavones, sterols, other plant phytoestrogens and derivatives of coumarin). It also contains all of the essential amino acids and 8 enzymes.

Beetroot is the taproot portion of the beet plant. It is one of several of the cultivated varieties of Beta vulgaris grown for their edible taproots and their leaves (called beet greens). It is a source of dietary fibre, folate (vitamin B9), manganese, potassium, iron and vitamin C. The deep red colour of beetroot results from the presence of a type of betalain pigment (betacyanins). Beetroot is also a source of betaine and inorganic nitrates.

The cinnamon plant is a small, evergreen tree belonging to the family of Lauraceae within the genus, Cinnamomum. This spice is native to Sri Lanka, but is also now grown in many other countries such as Indonesia, Myanmar, Bangladesh, India and China. It contains flavonoids (such as carotenes, zea-xanthin, lutein and cryptoxanthin) and essential oils such as eugenol (a phenylpropanoids class of chemical compound that is responsible for its pleasant, sweet aromatic fragrance), ethyl cinnamate, linalool, cinnamaldehyde, beta-caryophyllene and methyl chavicol. It also contains vitamins and minerals like potassium, calcium, manganese, iron, zinc, magnesium, vitamin A, niacin, pantothenic acid and pyridoxine.

Although most people think of dandelions as pesky weeds, the plant has long been used for potential health applications. The root itself is sometimes roasted to create caffeine-free dandelion coffee. When used for supplements, the dried or fresh root can be made into teas, tinctures, decoctions (infusions) and poultices. Dandelion root is also available in capsule form.

These cherries contain naturally high levels of vitamin C (30 times the amount found in oranges of the same weight), as well as approximately 150 other nutritive constituents, including bioflavonoids, proteins, mineral salts, iron, calcium and phosphorus.

Chlorella is a single-cell green algae, which is cultivated in large man-made freshwater ponds under artificially-controlled conditions. It contains protein (60%), including all of the essential amino acids, as well as vitamins B1, C, E and K and the carotenoids beta carotene and lutein.

Blackcurrants are a source of vitamin C (containing more than 3 times the amount found in oranges of the same weight), as well as bioflavonoids and anthocyanins - pigments which give blackcurrants their distinctive dark purple colour.

A member of the umbelliferous vegetable family, parsley is rich in nutrients, such as vitamins A, C and E, bioflavonoids, iron, folic acid, volatile oils, coumarins, flavonoids, chlorophyll and other phyto-nutrients. Parsley contains more vitamin C than any other culinary vegetable, i.e. approximately three times as much as that found in an orange and about the same amount as blackcurrants. Its iron content is high (around twice as much as spinach). It is also a good source of manganese, calcium and potassium.

This versatile fruit has long been used for its potential health applications by Africans across the continent. It is also famed for its nutritional properties. Much like the moringa, it is a "super" food that deserves the name! An excellent source of many vitamins and minerals, it has:

In other words, baobab is highly nutritious and different parts of the plant supply varying amounts of protein, vitamin C, antioxidants, potassium, magnesium, iron, zinc, calcium and B vitamins.

The acai (pronounced ah-sigh-ee) berry is a small, dark purple palm fruit, indigenous to the Amazon rainforest. For hundreds of years, these berries have formed a staple part of the diet of native tribes. As a richly coloured fruit, acai berries naturally contain the purple pigments known as anthocyanins.