Research has found that lion's mane may protect against dementia, reduce mild symptoms of anxiety and depression and help repair nerve damage. 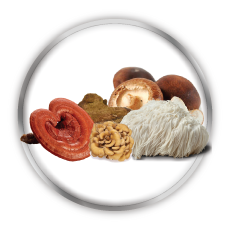 Benificial for Digestion and Inflamation

As well as its primary immunity properties (backed by science), this unique complex supports everything from energy levels, to the protection of cells from oxidative stress.

The ingredients used in this food supplement have been certified organic by the Soil Association, meaning no toxic pesticides or fertilisers have been used, resulting in a “clean” product.

Organic- registered with the Soil Association

Maitake mushroom: Grifola frondosa is a polypore mushroom that grows in clusters at the base of trees, particularly oaks. The mushroom is commonly known among English speakers as "hen of the woods", ram's head and sheep's head. It is typically found in late summer to early autumn. In the United States, as well as in Asian grocery stores, the mushroom is known by its Japanese name maitake (舞茸, "dancing mushroom"). Like all polypores, the fungus becomes inedible when older, because it is then too tough to eat. It is native to China, the northeastern part of Japan and North America.

Reishi mushroom: The lingzhi mushroom is a polypore mushroom belonging to the genus Ganoderma. Its red-varnished, kidney-shaped cap gives it a distinct appearance. When fresh, the lingzhi is soft, cork-like and flat. It lacks gills on its underside, and instead releases its spores via fine pores. Depending on the age of the mushroom, the pores on its underside may be white or brown. It grows at the base and stumps of deciduous trees, especially that of the maple. Only two or three out of 10,000 such aged trees will have lingzhi growth, and therefore its wild form is extremely rare. Today, lingzhi is effectively cultivated on hardwood logs or sawdust/woodchips.

Shiitake mushroom: Lentinula edodes are widely eaten as a food and used in herbal preparations in the Far East and South America. They have more recently grown in popularity in the West and contain triterpenes, polysaccharides and lentinan.

Lion's Mane mushroom: Hericium erinaceus (also called lion's mane mushroom, monkey head mushroom, bearded tooth mushroom, satyr's beard, bearded hedgehog mushroom, pom pom mushroom, or bearded tooth fungus) is an edible mushroom belonging to the tooth fungus group. Native to North America, Europe and Asia it can be identified by its long spines (greater than 1 cm length), its appearance on hardwoods and its tendency to grow a single clump of dangling spines. In the wild, these mushrooms are common during late summer and fall on hardwoods, particularly American beech.

Chaga mushroom: Inonotus obliquus, commonly known as chaga (a Latinisation of the Russian word чага), is a fungus in the family Hymenochaetaceae. It is parasitic on birch and other trees. The sterile conk is irregularly formed and has the appearance of burnt charcoal. It is not the fruiting body of the fungus, but a sclerotium or mass of mycelium, mostly black because of the presence of massive amounts of melanin. It is found most commonly in the circumboreal region of the Northern Hemisphere where it is distributed in birch forests.

Astragalus root: Astragalus propinquus, commonly known as Mongolian milkvetch in English and as huáng qí, běi qí or huáng huā huáng qí in Chinese, is a flowering plant in the family Fabaceae. It is one of the 50 fundamental herbs used in traditional Chinese medicine. Chemical constituents of the roots include polysaccharides and triterpenoids, as well as isoflavones and their glycosides and malonates.

Black pepper: Black pepper (Piper nigrum) is a flowering vine in the family Piperaceae, cultivated for its fruit, which is usually dried and used as a spice and seasoning. When dried, the fruit is known as a peppercorn. When fresh and fully mature, it is approximately 5 millimetres (0.20 in) in diameter, dark red, and, like all drupes, contains a single seed. Peppercorns, and the ground pepper derived from them, may be described simply as pepper, or more precisely as black pepper (cooked and dried unripe fruit), green pepper (dried unripe fruit) and white pepper (ripe fruit seeds). Piperine is the alkaloid responsible for the pungency of black pepper.