Organic-Superfoods is a comprehensive Soil Association certified Organic whole food supplement, with some of the most nutrient-dense ingredients that nature has to offer.
14
Food based ingredients 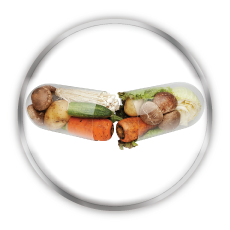 Organic-Superfoods is a comprehensive a Soil Association certified Organic whole food supplement, with some of the most nutrient-dense ingredients that nature has to offer

Quickly and easily access 14 organic fruits, berries, vegetables and herbs on a daily basis, with just this one convenient food supplement.

Organic- registered with the Soil Association

* Certified organic ingredients: 100% of the agricultural ingredients are produced in accordance with the rules of organic production. EU/non-EU agriculture. The herbs used in this food product are grown to the highest organic standards.

1 or 2 capsules to be taken 1 to 3 times per day, or as advised. Up to 16 capsules can be taken per day, depending upon requirements.

To be taken continuously for 2 to 3 months in order to derive maximum benefits.

Pre-sprouted activated barley: Barley has been used as a nutritious food staple for thousands of years. For example, the Roman army marched on it; it was the main component of their diet. Similarly, Greek gladiators trained on it and were known as “barley eaters.” In ancient Rome, a food made from sprouted barley, honey and colostrum was used to sustain infants whose mother’s died in childbirth. In more recent years, the same formula has been used by the UN to prevent starvation in 3rd world countries.

With pre-sprouted barley, all of the enzyme and nutrient activity in the grain is captured just before sprouting. It contains a range of nutrients, including tocotrienols, beta-glucans, vitamins (including vitamin A, B1, B2, B3, B5, B6, folic acid and vitamin E), minerals (including potassium, calcium, phosphorus, magnesium, iron, zinc, copper, and manganese), all 8 essential amino acids, fatty acids (essential fatty acids - linoleic acid (omega 6), linolenic acid (omega 3), as well as lauric acid, stearic acid and oleic acid), soluble fibre and enzymes (including Super Oxide Dismutase). It also ranks low on the glycemic index and, as a long-chain carbohydrate that takes up to 4 hours to break down in the digestive tract, provides a slow, sustained release of energy.

Barley grass: Barley grass is the leaf portion of the barley plant. It is a source of dietary fibre, organic sodium, vitamins (such as beta carotene, vitamins B1, B2, B6, C, folic acid and pantothenic acid), minerals (such as potassium, calcium, magnesium, iron, copper, zinc, phosphorus and manganese), amino acids, enzymes (such as superoxide dismutase (SOD)) and phytonutrients (such as chlorophyll).

Beetroot: Beetroot is the taproot portion of the beet plant. It is one of several of the cultivated varieties of Beta vulgaris grown for their edible taproots and their leaves (called beet greens). It is a source of dietary fibre, folate (vitamin B9), manganese, potassium, iron and vitamin C. The deep red colour of beetroot results from the presence of a type of betalain pigment (betacyanins). Beetroot is also a source of betaine and inorganic nitrates.

Bilberry fruit: The bilberry (Vaccinium myrtillus) is a round, flat-topped, tiny fruit that grows in the wild, and is seldom cultivated. The berries grow profusely on small, wiry shrubs, mainly on high ground in the north and west of the British Isles. Due to its small size and blue colour, it is often mistaken for a blueberry, but it actually tastes quite different.

Carrot: The carrot (Daucus carota) is a root vegetable, which is often under-rated in terms of its nutritional content. Carrots are a particularly good source of vitamin A (from beta-carotene), dietary fibre, potassium, biotin, vitamin K (phylloquinone) and vitamin B6.

Dandelion root: The roots of the dandelion plant contain a complex carbohydrate called inulin, as well as vitamins (including A, B complex, C and D), minerals (including zinc, calcium, iron and potassium) and compounds called sesquiterpene lactones.

Kelp: Kelp is a large edible seaweed (algae), which grows in underwater "forests" in shallow oceans. It contains vitamins (such as A, B1, B2, C, D and E), minerals (such as iodine, vanadium, zinc, magnesium, iron, potassium, copper and calcium), enzymes (haloperoxidases), amino acids (including tryptophan, threonine, isoleucine, methionine, cysteine and valine) and chlorophyll.

Turmeric: Turmeric (Curcuma longa) is a rhizomatous herbaceous perennial plant of the ginger family, Zingiberaceae. It is a spice which contains dietary fibre, volatile oil, vitamins (such as vitamin C and vitamin B6), minerals (such as potassium, calcium, iron and magnesium) and the yellow pigment, curcumin.

Wheatgrass: The crop from germinated seed of wheat grains, wheatgrass is a source of chlorophyll, plant protein, enzymes (including superoxide dismutase (SOD)), vitamins (including vitamins A, C, K, E and all the B vitamins) and trace minerals (including iron, phosphate, boron, copper, selenium, sodium, calcium, magnesium, potassium, chromium, manganese and zinc).