Caprylic acid is one of the three fatty acids found in coconut oil.

It's a medium-chain fatty acid with potent antibacterial, antifungal, and anti-inflammatory properties.

These properties make caprylic acid a helpful treatment for many conditions.
Livin La Vida
Without Candida 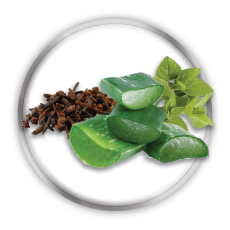 A best-seller and must-try product!

It contains caprylic acid, along with a broad spectrum of active herbals, probiotics and other natural cleansing and protective agents, which have anti-bacterial, anti-fungal, anti-microbial and anti-inflammatory actions.

The unique combination of ingredients in this food supplement helps to support the correct balance of gut flora (bacteria and yeasts), along with the integrity of the gastrointestinal tract and the growth of friendly bacteria.

This food supplement contains a combination of 16 food-based, herbal and bacterial culture ingredients:

Glucosamine is an amino sugar that is produced naturally in the body. It is also found in seashells, or it can be made in the laboratory. Glucosamine hydrochloride is one of several forms of glucosamine and the glucosamine HCL contained in this food supplement is derived from a vegetable source.

Lactobacillus acidophilus and Bifidobacterium bifidum are bacterial cultures that provide an additional source of the micro-organisms that are naturally found throughout the digestive system. This product contains 100 million active cultures per capsule.

Best taken in conjunction with a low yeast and low sugar diet.

A best-seller and must-try product!

Spore-Away is best taken in conjunction with a low-yeast and low-sugar diet, or as part of a cleansing programme.

More about the ingredients...

Allium sativum is a bulbous plant. It is widely used around the world for its pungent flavour, as a seasoning or condiment. Garlic contains several nutrients, including vitamins B1, B5, B6 and C, and the dietary minerals manganese, phosphorus, calcium, iron and zinc.

Aloe vera is a succulent plant and part of the lily family (Liliaceae), the same family that garlic and onions belong to. Different parts of the plant are used for different purposes and aloe vera has both internal and external applications. It contains vitamins (including A, C, E, folic acid, choline, B1, B2, B3 and B6), minerals (including calcium, magnesium, zinc, chromium, selenium, sodium, iron, potassium, copper, manganese), amino acids (including all 8 essential amino acids), enzymes (including aliiase, alkaline phosphatase, amylase, bradykinase, carboxypeptidase, catalase, cellulase, lipase, and peroxidase), sugars (including polysaccharides and monosaccharides), fatty acids (it provides 4 plant steroids: cholesterol, campesterol, β-sisosterol and lupeol), lignin, saponins and salicylic acids.

Closely related to rutin (one of several bioflavonoids that provide colour and taste to fruits and vegetables) and hesperidin, quercetin is a flavonol (a class of flavonoids) found in many fruits, vegetables, leaves, and grains.

"Lactobacillus acidophilus" means acid-loving milk bacterium. It is a species in the genus Lactobacillus, which occurs in the gut and, as such, provides an additional source of the micro-organisms that are naturally found throughout the digestive system. This product provides 100 million active cultures per capsule.

As with Lactobacillus acidophilus (see above), Bifidobacterium bifidus is a lactic acid bacterial culture that provides an additional source of the micro-organisms that are naturally found throughout the human digestive tract. This product provides 100 million active cultures per capsule.

Grapefruit seed extract, not to be confused with grapeseed extract, contains beneficial bioflavonoids including hesperidin.

Zinc citrate is a form of zinc (see above).

Glucosamine is an amino sugar that is produced naturally in the body. It is one of the most abundant monosaccharides and a natural precursor of glycosaminoglycans. It is also found in seashells, or it can be made in a laboratory. Glucosamine hydrochloride is one of several forms of glucosamine and the glucosamine HCL contained in this food supplement is derived from a vegetable source.

Beetroot is the taproot portion of the beet plant. It is one of several of the cultivated varieties of Beta vulgaris grown for their edible taproots and their leaves (called beet greens). It is a source of dietary fibre, folate (vitamin B9), manganese, potassium, iron and vitamin C. The deep red colour of beetroot results from the presence of a type of betalain pigment (betacyanins). Beetroot is also a source of betaine and inorganic nitrates.

The cinnamon plant is a small, evergreen tree belonging to the family of Lauraceae within the genus, Cinnamomum. This spice is native to Sri Lanka, but is also now grown in many other countries such as Indonesia, Myanmar, Bangladesh, India and China. It contains tannins, coumarin, flavonoids (such as carotenes, zea-xanthin, lutein and cryptoxanthin) and essential oils such as eugenol (a phenylpropanoids class of chemical compound that is responsible for its pleasant, sweet aromatic fragrance), ethyl cinnamate, linalool, cinnamaldehyde, beta-caryophyllene and methyl chavicol. It also contains vitamins and minerals like potassium, calcium, manganese, iron, zinc, magnesium. vitamin A, niacin, pantothenic acid and pyridoxine.

True oregano (known by the botanical name Origanum vulgare) contains a number of active compounds, including carvacrol and thymol.